Hounslow Council are consulting on what could be high quality cycling infrastructure for getting to work at the GSK complex where over 3,000 people work. The cycle route links the GSK and Sky complexes with Boston Manor Underground Station.

See the details of the consultation here You can respond by sending an email to transportplanning@hounslow.gov.uk

The current road layout: note the car parking bays that require motorists to drive over the advisory cycle lane

Option A is a fully segregated, bi-directional cycle lane, similar to what has been built on Cable Street.

Option A is superior as it clearly physically separates people on bikes from motor traffic and provides a continuous unbroken route between the major workplace locations and the railway station. The plans do not provide detail on what will happen outside Boston Underground Station, but the bridge is wide and we will push for a reduction in road width allocated to motor vehicles and an increase in width allocated to pedestrians and a cycle lane that connects to the railway station. A high quality crossing outside the railway station is also important, particularly for people traveling north-south by bike.

Boston Manor Underground station is situated on the eastern side of the bridge. The pavements are narrow relative to the width of the bridge: this is an opportunity to allocate the space better

In option A the design of the switch-over underneath the motorway is also critical – it is important this is not staggered with people traveling by bike left waiting in the middle of the road. 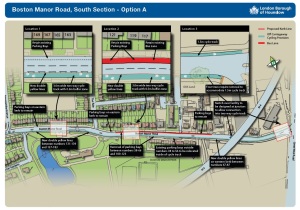 Separated cycle lane in Option A: northern section near the railway station

Option B is partially segregated on-road cycle lanes. One issue is that Option B leaves people stranded at the roundabout with the difficulty of maintaining a strong road position when motorists overtake before turning left into Swyncombe Avenue. 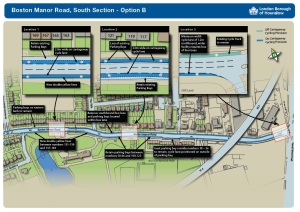 On-road cycle lane in Option B: southern section near GSK 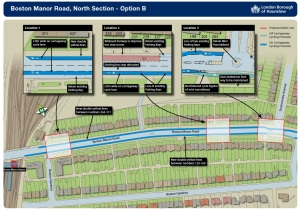 On-road cycle lane in Option B: northern section near the railway station

However, Option B is a bit cheaper to install. So, if Councillors decide to go for the cheaper option, here are our suggestions for ways it can be improved:

For both options, it is not clear what the detailed designs for the road junctions will be, particularly where the streets: The Ride and Boston Gardens each join Boston Manor Road. The quality of these ‘entry treatments’ could significantly affect the safety of the cycle lane. There is also a bus stop near Swyncombe Avenue. We would favour the cycle lane passing behind the bus stop. We will require further detail regarding this part of the design too.

Do you cycle from Boston Manor Road into Swyncombe Avenue? If Option A goes ahead would you want an additional crossing to cross from the eastern side of the road over into Swyncombe Avenue? We are considering asking for the roundabout to be replaced with a traffic light junction with crossings to make this movement easier once the segregated cycle lane is installed.

We’d urge people to vote for option A and to make Councillors aware of potential improvements to option B and option A. The council survey form is available here. Email you response to transportplanning@hounslow.gov.uk

1 thought on “Boston Manor Road: Vote for option A!”